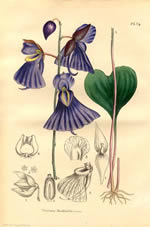 Botanical prints have a wonderful dual purpose: they are lovely aesthetic pieces, akin to fine art, but also have the meticulous detail necessary for science.

Botanical prints often reflect the preoccupations of society during the time in which they were created. For example ‘tulip mania’ swept through Holland in the 17th century, making prize tulip bulbs, and prints illustrating the bulbs, sought-after commodities. Fanciful British gardens cultivated in the 18th century were expertly rendered by a well-known Dutch flower artist, Jan Van Huysum.

Beginning in the early 17th century, European artists and scientists undertook massive projects to collect, capture and catalogue nature and its astonishing variety. Hortus Eysttensis was the first major collection of botanical illustrations; it was published in 1613 by Basilius Besler. At least 10 engravers worked under Besler’s supervision to complete the 16-year project, which documented the breathtaking gardens of the Prince Bishop of Eichstätt, in Germany.

In the eighteenth century, Johann Wilhelm Weinmann and a score of others worked on illustrations to introduce exotic plants to England. Examples of these exotics include the banana tree and lists of imported and domestic plants that were used in herbal remedies.

The 19th century saw the printing and distribution by American publisher Currier and Ives of a popular arrangement of still life floral bouquets. Many of the original lithographs and prints created by Currier and Ives remain available for viewing in prominent museums in the United States.

Botanical prints are considered a fusion of art and science, and there are many books and websites today that detail the scientific importance of these prints. With such a wide variety of plant species, many still undiscovered and unnamed, it is vital to have a complete record of plant life as it has appeared in history. The scientific community generally accepts the idea that plants hold the secret to powerful medicines that will be used to control or cure many of today’s diseases and illnesses and botanical prints provide a means of recording where certain plants were used in the past and when.

However, beyond their scientific value, botanical prints are also prized by collectors. Significant pieces, such as those featured in Hortus Eysttensis, can range in price from $1,800-$6,200 (USD). As in most cases, the prints in the Hortus series survive the garden, which was destroyed by Swedish troops in 1634. A reconstruction of the original garden opened in to the public in Eichstätt in 1998.

Interior designers also value botanical prints for their beauty and delicate colour, although the prints used in homes and other decorated buildings tend to be reprints collected and photocopied from old books.

The best way to learn to identify plants and flowers is to see good illustrations to aid recognition. Botanical prints are such an important resource for learning about plants and flowers as well as making beautiful pictures for hanging in your home.